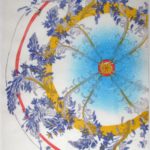 April Vollmer is a New York artist and writer with an M.F.A. from Hunter College, whose work focuses on mokuhanga. Her woodcut prints have been exhibited internationally; she has taught many workshops across the U.S. and is an instructor at the Lower East Side Printshop. She was on the board of the First and Second Mokuhanga Conferences in Japan, and is Communications Attaché for the Third. Her book Japanese Woodblock Print Workshop was released by Watson-Guptill in 2015.

Introducing the Floating World to the International Artist Community

Over the last two decades there has been a growing interest in Japanese woodblock, mokuhanga, outside Japan because it is water-based and does not require the use of a press. The Nagasawa Art Park residency program and its successor Mi-Lab (Mokuhanga Innovation Laboratory) have been of special importance in promoting an understanding of mokuhanga as a creative practice outside Japan. These programs focused on short-term residencies to train mid-career artists from a variety of locations who might promote the technique in their home countries. Because many of the participants were or later became teachers the influence of the program has been greatly magnified over time. These programs have expanded to include a research residency at Mi-Lab, professional development classes for Japanese artists and short classes in mokuhanga at the Tokyo office, which also includes a gallery space. In addition to the residency program, the associated International Mokuhanga Conference, held every three years, has provided a significant meeting place for alumni, educators, printmakers and others interested in the materials, history and technique of mokuhanga.

The timing of these Japanese programs coincided with a new appreciation for this nineteenth century technique reflecting a transformation in the way printmaking is done today. A new environmental awareness, increased concerns about safety, and an emphasis on flexibility and mixing media, along with a broader cultural overview, are elements that make Japanese woodblock especially relevant in contemporary printmaking studios. These characteristics have made mokuhanga a significant bridge in promoting the growth of residencies and participation in conferences and exchanges for Japanese as well as international artists. The programs initiated by Keiko Kadota have made this connection clear and have connected many artists across cultures.

Address
The International Mokuhanga Association is an international organization with a Head Office in Tokyo at the CfSHE Annex, Chiyoda-ku, Tokyo 101-0021, Japan

This is the site for information about the Third International Mokuhanga Conference which took Place September 29 to October 8, 2017.